The Festival Board of Directors thanks all of the sponsors of the Festival and the hundreds of volunteers who make this grand event possible!

It all began in 1936 in the midst of “the worst winter in years.” The whole country suffered in the grip of heavy show and sub-zero temperatures.

A New York feature writer bemoaned the “fact” that, “Here we are in the midst of an old-fashioned winter and there are no red flannels in the USA to go with it.

”The local newspaper, The Cedar Springs Clipper, owned and edited by “The Clipper Gals” Nina Babcock and Grace Hamilton answered the writer with a RED HOT editorial stating, “Just because Sak’s Fifth Avenue does not carry red flannels, it doesn’t follow that no one in the country does. CEDAR SPRINGS’ merchants have red flannels!”

The story was picked up by The Associated Press and orders began pouring in from all over the USA.

Jack Pollock and his wife Ann, owners of Pollock’s Store in downtown Cedar Springs, had a large stock of Red Flannels. They were tireless supporters of the early Red Flannel Festivals and “drop seaters.”

Seeing the possibility of at least a few years of publicity because of our famous “drop seaters” and lumbering history, a “RED FLANNEL DAY” was planned for the fall of 1939. The love, pride and support of the community has kept the rich tradition alive! It has continued to be an annual event, held the last weekend in September and the first weekend in October for the 71st YEAR, making it the 15th oldest festival in the State of Michigan! 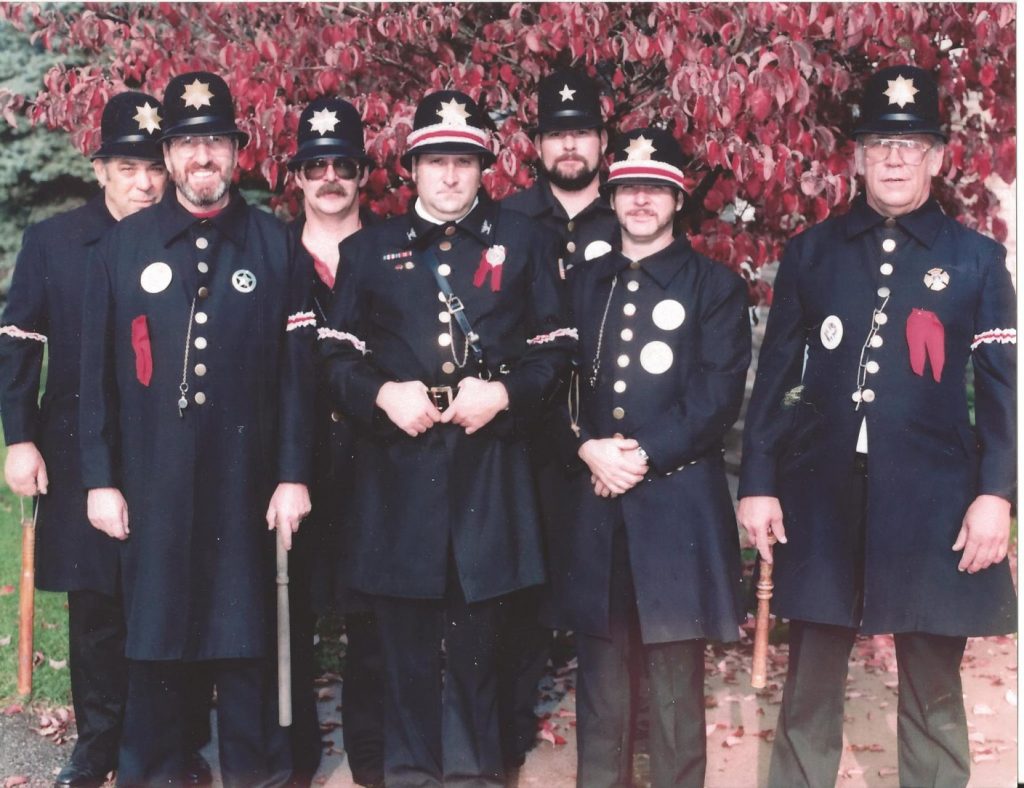 The MOST FAMOUS ICON of the Red Flannel Festival, the Keystone Kops, drive an Antique Fire truck arresting everyone not wearing RED! Be on the lookout and prepared with $1 in “bail money” to pay for the “get out of jail free” button!

The first Red Flannel Day was held Nov. 11, 1939 and Carleton Cady wrote in that issue of the Grand Rapids Press:

“Lurid lingerie adorned the limbs of nearly every citizen. Scarlet certificates of knighthood were issued to members of the Order of Knights of the Red Flannel Drawers, who proudly wore the badge, which, in miniature, reproduced the article that on winter Monday’s flies from Cedar Springs’ clotheslines.” 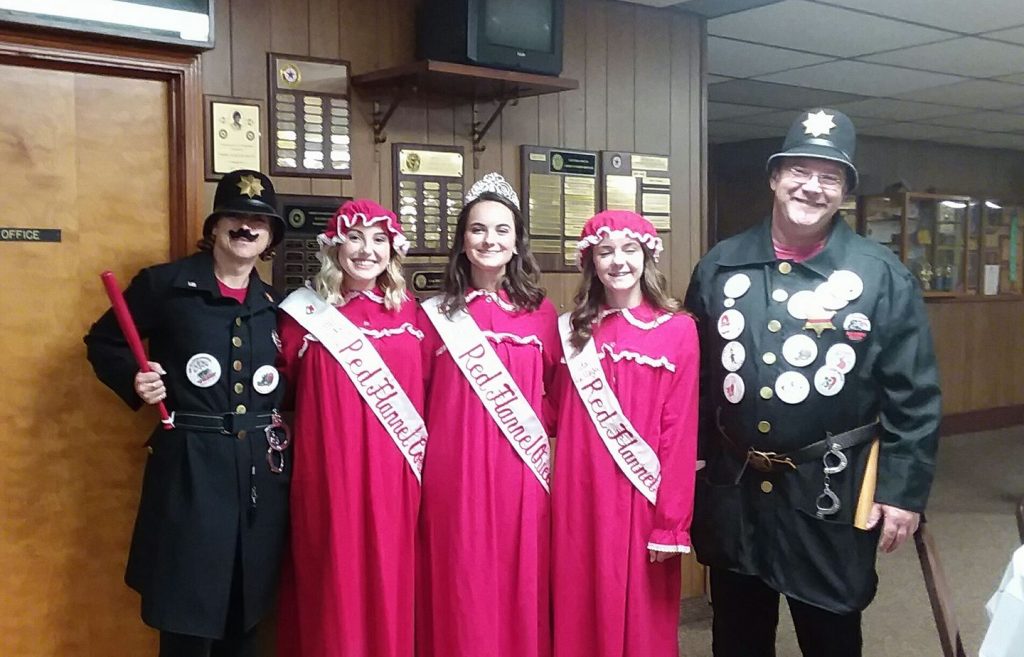 Their password was “itch”. Dr. C. W. Brayman, James H. Cook and Jack Pollock were some of the first members in good standing, crowning the first Red Flannel Queen, Maxine Smith. History is important, it provides a link between the past and present. In 2010, the Red Flannel Board of Directors proudly revived the Order of the Knights of the Red Flannel Drawers with a swearing in ceremony and buttons, mugs and shirts with this special logo!

Okay, at long last, here is the story of how Cedar Springs, Michigan became the Red Flannel capital. But first a quick word on “capitals of the world.” We have all heard of the “movie capital” – Hollywood or the “automotive capital” – Detroit. But there are others. And they do not rely on any bureaucratic process to become a “capital.” They are self proclaimed. For example, there is Beaver, OK – the cow chip throwing capital, Mercer, WI – the loon capital and Fort Payne, AL – the sock capital. But it is one thing to proclaim your town as a world capital, it is quite another to maintain the title for over 70 years.

In the winter of 1936, in the midst of the great depression, the whole country was in the throes of a harsh winter with temperatures below zero and heavy snows. A feature writer for the New York Sun newspaper attempted to locate good old fashioned long red underwear to help ward off the bitter cold. He declared them to be OBSOLETE having searched as far west as Cleveland! The editors of the Cedar Springs Clipper, Grace Hamilton and Nina Babcock (known to all as the Clipper Girls), saw the Sun story. They knew that long red underwear was a common site in Cedar Springs which got it start as a lumber town in the mid 1800’s. So they asked the owner of a local dry goods (department) store, Jack Pollock, if he had them. He didn’t bat an eye. He reached back and pulled a pair right off the shelf behind him as he asked, “What size?” (What the Clipper Girls may not have known is that had they asked Jack about a tutu for an elephant, he would have said, “What size?”) Never the less, it was determined that Pollock’s Store sold them to deer hunters and local farmers and had plenty in stock.

Nina wrote an editorial in the Clipper in reply to the Sun as follows: “Who but a New Yorker would conclude that all the world doesn’t because we don’t? Or who but a Gothamite would expect that there are no Red Flannels just because Saks Fifth Avenue, Lord and Taylor, Bergdorf Goodman don’t wrap ‘em up for their clients? Wait, don’t write off us lumberjacks yet; we’ve got plenty of Red Flannels in Cedar Springs.” It seems that the Associated Press wire service picked up the Clipper story and ran it nationwide. Orders started pouring in from all over the country;

For the next two years, orders for Red Flannels continued to arrive as the supply dwindled. By 1938, the shelves were nearly bare. After a considerable search Jack found that a woolen mill in Winstead, Connecticut was only manufacturer still making red long johns. With a source supply assured, the it was decided to hold a festival and to proclaim Cedar Springs as “the Red Flannel Town.” There were a few dissenters who objected to having their town associated with underwear but the nickname was eventually approved.

The First Red Flannel Festival was held in November of 1939. Featured crowning of a Queen by the local congressman at half time of the high school football game, a parade down Main Street, a lumber jack supper, numerous arrests by the Key Stone Cops of anyone failing to wear something red, and induction of local dignitaries into the Order of the Knights of the Red Flannel Drawers (the password was “itch.”).

With the exception of the World War II years, Cedar Springs has continued the tradition. Some of the highlights over the years were: 1) the story in the December 19, 1949 Life Magazine featuring a full page color photo of the aforementioned Jack Pollock, attired in Red Flannels, taking a picture of seventy-five similarly attired school kids, 2) the establishment of a local Red Flannel manufacturing facility, first by Mae Oppeneer then by Sally Wall, and 3) then-Congressman Jerry Ford leading the parade in 1973 the day after he had been designated as Vice-President of the United States.

This all may sound a bit corny but after ten years of the great depression, this Red Flannel thing helped put a little spring back into every one’s step back in 1939. It has helped ever since to keep a small town of 2000 residents on the map when many towns like it were fading away. So if you are ever in the Midwest on the first weekend in October, head on over to Cedar Springs for a slice of small town America at is best. By the way, that Jack fellow was my old man.

Thanks to Sue Harrison and Donna Dejong, whose “The Cedar Springs Story” was invaluable in telling this tale.,

Stay up to date on all things Red Flannel Festival!